Zelda Spellman is a witch who, along with her sister Hilda, took in her niece Sabrina to raise and teach how to be a witch. Zelda is the middle child of her family, having an older brother and sister, and two younger sisters.

Zelda is a tall and very slim woman with naturally blonde hair. She dresses very fashionably, however is much more introverted style wise compared to her sister Hilda. When Zelda begins work at Adams College, we mainly see her wearing business suits with a medium length skirt. Zelda is not shy about admitting how attractive she is, often openly taking pride in her combination of beauty and brains; allowing her to flirt/seduce men without any nerves or fear of rejection. Zelda's hair varies in length, however her most recognizable style is the long-bob cut which she had in the show's second, fifth and sixth season. In later seasons, Zelda's hair has a darker tone of blonde with lighter highlights, as opposed to the full bright blonde she has in earlier episodes.

Zelda is the mature sister who is renowned in scientific circles for her outstanding intelligence and scientific endeavors. Zelda often acts as the disciplinarian and head of the household, since her fun-loving sister Hilda takes a much more relaxed approach to being Sabrina's guardian. Zelda has a passion for science, specifically physics and chemistry. She is often the more responsible of the two aunts and displays level-headed, logical sense. Zelda also spends much of her time helping Sabrina learn about her magic and how to control her powers. she could sometimes be arrogant and egotistical.

Zelda and her sister, Hilda, grew up in the 14th century. When Zelda and Hilda were children, their sister, Vesta, turned their parents into pigs, as she was terribly jealous of all the attention Zelda and Hilda got. The Witches Council decided that people with pigs feet couldn’t raise children, so when Vesta refused to turn them back, Hilda and Zelda's parents adopted them out to a nice family in the country; their parents lived in the barn. One month later, their mother, Lydia, finally got Vesta to turn then back by head-butting her. To get Zelda and Hilda back legally, their parents had to adopt them.[2]

Zelda, during the Renaissance, lived in Florence and met a man named Benvolio. Though her father disliked Benvolio, Zelda married Benvolio anyway, though their marriage only lasted three days.[3] In 1469, Zelda broke James Hexton's heart by choosing to date Johannes Gutenberg.[4] At some point, Zelda woke her Aunt Dorma up and was turned into a porch swing.[5]

Over two hundred years prior to the series, Hilda and Zelda moved to the Mortal Realm. However, only Zelda filled out the proper paperwork to migrate there legally.[6]

As Zelda reached adulthood, she went off to college. Zelda attended Other Realm University and subsequently went on to pursue three advanced degrees from Harvard University, graduating in 1873. Both sisters bounced from one job to another over the centuries while trying to find what they wanted to do. Zelda worked as a coal miner when she lived in Wales, rating this as her worst job. During the early 19th century, Hilda and Zelda worked together at a saloon. They were run out of town, but fortunately found a way to maintain some financial security: junk. In the early 1990s, before Sabrina came to live with Hilda and Zelda, they had manservants, spent late nights on the town, weekends in Tuscany, took part in Formula One racing, and originally had a disco on the second floor of their house.

In the first season, we learn that Zelda has a passion for science, specifically physics. She is often the more responsible of the two aunts and displays level-headed, logical sense. Zelda also spends much of her time helping Sabrina learn about her magic and how to control her powers.

In the beginning of the season, Zelda and Hilda inherit a substantial amount of money from an investment they made back in 1660 and argue over what they should do with it. Hilda wants to spend it while Zelda would prefer to invest it. They flip a magic coin and Zelda wins, and with the money she buys a "Labtop" (a portable potion-brewing set), wanting to expand from physics into chemistry. She, Hilda, Sabrina and Salem use her labtop frequently throughout the series to make potions. Zelda is often frustrated when she finds that the other three have used her equipment without her permission.

Hilda and Zelda reveal to Sabrina that in order to use her Witch's License, she must first solve the family secret. Zelda goes on to help Sabrina as best she can to solve the family secret without actually revealing it to her, welcoming help and clues from Sabrina's magical relatives. After seeing his failed attempts to woo Hilda, Zelda starts dating Sabrina's vice principle Willard Kraft, which makes Hilda slightly jealous (though she initially approved, she often accuses Zelda of "stealing" Willard). As a result, Zelda often suffers over Hilda's and Sabrina's constant attempts to make her break up with Mr. Kraft. She herself gets frustrated with Willard, especially when she is under the impression that he is going to propose and he merely asks her to do his taxes.

As well as helping Sabrina with her magic along with mortal problems, Zelda also has to contend with helping Hilda after she buys a clock shop, containing a magical "Lost in Time" clock. Occasionally, people who have become lost in time will emerge and as the owners of the clock it is Zelda's and Hilda's responsibility to help them return to their own time or risk being turned into clocks themselves. Zelda continues to date Mr. Kraft and gets a little jealous when Mr. Kraft's brother begins spoiling Hilda; however, that relationship doesn't work out. When Sabrina is accepted to the University of the Other Realm, Zelda is ecstatic and encourages Sabrina to attend her alma mater. However, she is supportive as usual of Sabrina's decision to attend Adams College in Boston.

Zelda must learn to cope with the fact that Sabrina has moved out of the house and into student housing closer to campus. She dives into her work and eventually she gains a position at Adams as an associate professor of quantum physics, which annoys Sabrina initially. After the end of her relationship with Willard Kraft, she meets Sabrina's literature professor, Arthur Carlin. The two date briefly but Zelda realizes he is too controlling and stifles creativity with his pompous attitude. Zelda learns to hang loose a little more after spending a few days with Sabrina and her roommates. After completely unraveling, she realizes that she cannot do anything that is untrue to herself but can still loosen up and have fun occasionally.

Zelda breaks up with Professor Carlin permanently and is distraught over her failed love life. When Zelda mentions her past love, Gabriel, Sabrina goes back in time to make sure Zelda doesn't walk away from him. Sabrina returns to the altered present and finds that Zelda is miserable living with Gabriel, however she won't admit it. Sabrina goes back in time again and puts things back to how they were before. Back in the present, Zelda tells Sabrina that she knew deep down that Gabriel wasn't the one, but she thinks of him after every break up wondering how things could have been. Near the end of the season, Zelda and Sabrina attempt to make Hilda realize she is making a huge mistake in marrying Will, a man she had only just met. When Zelda seduces Will to put him in a compromising position, Hilda finds the two and sends Will away. Hilda then turns to stone and falls apart, which indicates to Zelda that Will had been Hilda's soulmate.
When Sabrina gives up her true love to bring Hilda back to life, she then turns to stone and falls to pieces after losing her true love. Zelda gives up her adult years to save Sabrina and reverts to her childhood state. After Hilda moves to the Other Realm to live with her new husband Will, Zelda moves back to the Other Realm as well. She is not heard of or seen until the day of Sabrina's wedding. She and Hilda plead to The Witches Council to allow Sabrina's mortal mother to attend her wedding without being turned into a ball of wax and Hilda volunteers Zelda to be turned into a candle as a sacrifice, until after Sabrina's wedding. She and Hilda watch as Sabrina rides off with Harvey after cancelling the ceremony and indicates her contentment and pride by igniting her own wick. 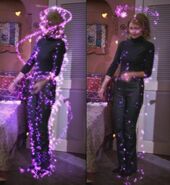 Zelda has the typical weaknesses of a witch. Being a Spellman, she had an addiction to pancakes and was deathly allergic to Other Realm poppies.