Start a Wiki
The Good, the Bad and the Luau is the twenty fifth episode and the finale of the third season and the seventy fifth overall episode of Sabrina the Teenage Witch.

Sabrina is taken to Hawaii for the Spellman family reunion but instead of beach and fun, she has to stay in her bedroom until she figures out the family secret. When she does find out that "every member of the Spellman family is born with a twin," Sabrina meets Katrina, her identical twin from South Dakota. After the two spend quality time together in Hawaii, they discover that they must be put on trial to determine which one is the evil twin. Because of her selfish spells, Sabrina is determined to be the evil twin. As a result of this, the Witches Council tell Sabrina that she must be thrown into a volcano and Katrina un-hesitatingly pushes her in, revealing that was the final test, proving that Katrina is the evil twin.

Meanwhile, Harvey, under the affects of a "Dr. Dolittle spell," stays with Salem while the Spellman women are away and Salem is taking care of Lola, a pregnant cat. When both Harvey's mom and Lola go into labor, Sabrina casts a spell to relax Lola that accidentally transfers her kittens into Mrs. Kinkle. When that problem is fixed, Lola gives birth to Groucho, Harpo, Chico, Zeppo, and Pepe while Harvey's mom gives birth to a healthy baby girl named Una. Harvey later takes Lola and her kittens since meowing stops Una from crying. Salem is allowed to visit but is rather sad to see them go.

To Relax a Pregnant Cat (failed and transferred her kittens into Mrs. Kinkle)

Until this cat gives birth to a litter,
Make her calm and relaxed for her new cat sitter.

To Transfer the Kittens Out of Mrs. Kinkle and back into Lola

There was a spell that went wrong,
Put these kittens back where they belong. 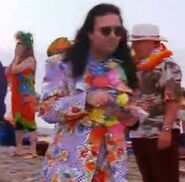 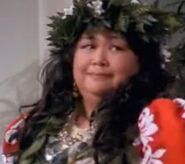 Add a photo to this gallery

Retrieved from "https://sabrinatheteenagewitch.fandom.com/wiki/The_Good,_the_Bad_and_the_Luau?oldid=16298"
Community content is available under CC-BY-SA unless otherwise noted.