Soul Mates is the 22nd episode of Season Seven and the 163rd episode of the series overall. It is the final episode of Sabrina the Teenage Witch.

It is Sabrina's wedding day and she wakes up with cold feet (literally frozen solid) and her feet are in giant ice cubes. As family members arrive at the Spellman household, Sabrina must get rid of all her doubts in time to walk down the aisle. Sabrina is visited by Doubt himself and handed Aaron's soul stone. Sabrina zaps herself to The North Star and gets her own soul stone, to find out if her stone and Aaron's are a fit and whether they are truly meant to be together.

Salem wakes Sabrina up on her wedding day and tries to make sure she doesn't have cold feet. To her surprise, her feet are actually frozen in two big blocks of ice. In the kitchen, Morgan and Roxie are organizing everything for the wedding when Aaron and his parents stop by to figure out if Sabrina is ready. In her room, Sabrina breaks the blocks of ice, and has Roxie and Morgan tell everyone that she's gonna be a few minutes.

Aaron calls Sabrina downstairs to say that Aunt Hilda has arrived with a llama! They go to the kitchen where Hilda reveals that the llama is actually her mother who doesn't turn into a ball of wax. Hilda and Zelda went to the Witches Council to convince them to allow Diana to be at Sabrina's wedding without consequences and Hilda volunteered Zelda to be temporarily turned into a candle in sacrifice. Amanda then zaps herself to Harvey on his motorcycle to convince him to go to the wedding but he refuses.

Sabrina is still not ready and goes to her room to find Doubt waiting for her and Sabrina argues that she's not doubting anything. Doubt gives Sabrina Aaron's soul stone from the North Star and tells her to go there to get hers. She gets it and goes back to her room where Amanda tells her that everyone thinks she ran away. Sabrina then matches her stone with Aaron's but they don't fit together, meaning they're not soul mates.

At the church, Sabrina is trying to make the stones fit together to no avail while Salem tries to give her advice. Morgan, Roxie, Diana, Hilda, and Aaron's parents burst in to tell her about the problems at the wedding but Aaron comes in to break it up. Aaron talks with Sabrina about both of their doubts and tells her that the only thing that matters is that they love each other.

The wedding starts and elsewhere, Harvey finds that Amanda has left his soul stone on his motorcycle. Just as Sabrina's dad shows up to walk her down the aisle, she panics when she realizes that the something old Morgan gave her to wear is actually the bracelet that Harvey gave her way back in their sophomore year. The bracelet has the inscription "12:36," which is the time that she and Harvey met. Sabrina zaps herself in miniature size to Hilda and Diana to get them to talk to her in the back. Diana and Hilda tell Sabrina to stop putting her faith in magic and to follow her heart. However, at the altar, Sabrina is unable to complete her vows and Aaron realizes that they're not soul mates and he is okay with calling the wedding off, both saying to the other that almost is not good enough for them.

Sabrina runs out of the church and finds Harvey waiting for her with his soul stone. Sabrina realizes that Harvey is the answer so she runs up to him and they share a kiss. Everybody then comes out of the church stating that it's about time. Ted realizes that it's 12:36 on the dot. Harvey and Sabrina's soul stones fit perfectly together and they ride off on his motorcycle, ending seven years of magic and laughs!

To Go to the North Star

One place in heaven is always true,
Help me to know before I say "I do."

Emily and Melissa Joan Hart, with their siblings 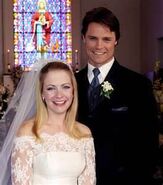