The seventh season of Sabrina the Teenage Witch aired from September 2002 until April 2003, and consists of 22 episodes. This is the final season of the series and mainly focuses on Sabrina trying to live as an adult while she works at Scorch Magazine and her engagement to Aaron Jacobs.

Season Seven has a photo gallery

She's torn between two guys! Romance is in the air as the seventh season of Sabrina, the Teenage Witch arrives! Now that Sabrina is no longer a teenage witch, her aunts decide to move back to the Other Realm . Yet Sabrina still needs to keep her magic powers in check as she and gal pals Roxie and Morgan move back into the aunts' old Victorian house. Meanwhile, Sabrina has landed a job as a writer for the hip music magazine Scorch, where she meets her future fiance Aaron. But with her former boyfriend Harvey being egged on by mischievous cat Salem, who knows which guy Sabrina will choose? Enjoy every laugh of the romantic- but hilarious- final season of Sabrina, the Teenage Witch! 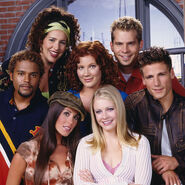 Add a photo to this gallery

Retrieved from "https://sabrinatheteenagewitch.fandom.com/wiki/Season_7?oldid=16880"
Community content is available under CC-BY-SA unless otherwise noted.