Sabrina Goes to Rome is a 1998 television film produced for the American Broadcasting Company (ABC). The film is a part of the Sabrina the Teenage Witch TV series franchise and is the second TV film made for the series following the 1996 film, which was produced before the TV series went into production.

The film features only two main characters from the TV series, the protagonist Sabrina Spellman (played by Melissa Joan Hart), and other main character Salem Saberhagen (voiced by Nick Bakay). The film introduces the character of Gwen (played by Tara Charendoff), a British witch, whom Sabrina meets in Rome. As the film is set in Rome, none of the scenes are set on the original set of the TV series.

The film was directed by Tibor Takács, the director of the original Sabrina the Teenage Witch film. Takács also directed an episode of the TV series.

Due to the success of Sabrina Goes to Rome, ABC produced a sequel titled Sabrina Down Under. This film again only included Sabrina and Salem from the TV series. Tara Charendoff reprised her role of Gwen for the second film.

The film is included in the season 7 DVD release of the Sabrina the Teenage Witch TV series.

If Sabrina cannot open a mysterious antique gold locket and release the power trapped within, her Aunt Sophia will be lost forever. "The secret to the locket lies in Rome", her father says. Sabrina heads for Italy and the Eternal City of Rome, for what was supposed to be "two cat-less weeks" to herself. Unknown to her she is accompanied by Salem who has stowed away in her backpack. Sabrina finds an unexpected roommate: Gwen, a British witch with a talking guinea pig named Stonehenge (nicknamed "Stony"). At the inn where she is staying, Sabrina learns that her Aunt Sophia was banished and trapped in the locket because she fell in love with a mortal who betrayed her and revealed to a friend that she was a witch. Later while traveling the city, she meets Paul, the gorgeous American photographer who catches her before she falls into the famous Trevi Fountain. Together, Sabrina and Gwen set out to solve the mystery of the locket. When Paul and his friend Travis witness Sabrina doing magic, while turning a walking statue to stone (that Gwen brought to life by accident) they come up with an idea to sell the story. In the end Paul doesn't betray Sabrina, which sets Aunt Sophia free, as the locket says "Trust your heart".

To Make a Place Look As It Did In the Past

Soot and grime,
Dust of time,
Take us back to the scene of the crime.

To Turn Alberto into a Pigeon (intended love spell)

Alberto, who with my heart does play,
Fly to my side on wings of grey,
And there you'll stay,
Without delay!

(Note: This spell can only be reversed with a kiss from the spell caster.)

As part of the Sabrina the Teenage Witch book collection, a book titled Sabrina the Teenage Witch: Sabrina Goes to Rome is available. The book is credited to author Mel Odom and the film's screenwriter Daniel Berendsen. It is unnumbered, as is the second film's book adaptation. The other books in the series are numbered in reading order. The book adds in a subplot not shown in the film - featuring Sabrina's aunts back in Westbridge spying on Harvey and a mysterious girl named Tish. This also references previous continuity from the TV series, where Hilda has brought back the three butlers the aunts used to employ (as shown in season 1's "The Great Mistake").

As part of the Sabrina, the Teenage Witch: Salem's Tails book collection, a book titled Salem's Tails: Salem Goes to Rome is available. The book tells Salem's tale of his trip to Rome. This book is also unnumbered. 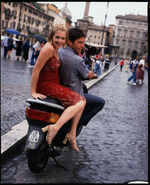 The cover for "Salem Goes to Rome" features both Salem and Stoney.
Community content is available under CC-BY-SA unless otherwise noted.
Advertisement