Oh What A Tangled Spell She Weaves

Oh What a Tangled Spell She Weaves is the 11th episode of Season 2 on Sabrina the Teenage Witch.

Sabrina neglects a vital fact in her use of incantations: if she fails to consider a spell's consequences and comes up with sloppy incantations, there will be a ruinous aftermath. When she accidentally sends her aunts and Salem to Merlin's castle where they are held captive, it's up to the Quizmaster to teach Sabrina a valuable lesson. Meanwhile, Sabrina gets a job at The Slicery with Valerie and, as they are not doing very well in it, Sabrina casts an efficiency incantation on Valerie, who becomes overtly efficient and power hungry and fires Sabrina for sleeping on the job.

Hilda: You really have to get it exactly right the first time, otherwise there may be side effects. I remember one time I was making rum balls and I got tired, so I made a make everything round spell. Well let's just say you can thank me for Columbus Day.

Hilda, Zelda and Salem have been zapped from the Spellman House to a castle as a result of one of Sabrina's incantations.

Zelda: Where are we?

Hilda: I don't know but I bet I know who's to blame.

Salem: Oh, I'm sure she heard that.

Hilda: Huh? That is our rug.

Salem: That was helping.

Hilda and Zelda bend down to pick up the rug.

Zelda: You know this place reminds me of Merlin's old weekend castle.

Hilda: Oh, man, you guys had a vicious break-up.

Zelda: It was awful. By the time it was over the only thing I liked about him was ...

Zelda's eyes widen as something suddenly dawns on her.

They drop the rug.

Zelda: This is Merlin's castle, we'd better get out of here.

Hilda: Yeah. For a guy who wears a dress, he's a real misogynist.

Salem (as a kitten): I found the fountain of youth. It's in the toilet!

(Cast by Sabrina Spellman)
Stuff is messy,
This place is a zoo.
Make things that need it brand-spanking new.

(Cast by Sabrina Spellman)
I made things new and that was bad,
Undo it all so they won't be mad.

(Cast by Sabrina Spellman)
Maybe this Friday you'll start the game
And Uncle Lloyd will leave in shame.

(Cast by Sabrina Spellman)
No spells in school unless I gotta,
And I do, so make it hotter!

(Cast by Sabrina Spellman)
I can't tell the future, that'd make me omniscient,
But something bad's gonna happen unless Val's more efficient.

To Put Things Back Where They Belong

(Cast by Sabrina Spellman)
Here's a quiz I know I'll ace,
Put everything back in its rightful place.

Undo for the Heat Spell (failed)

(Cast by Sabrina Spellman)
It's hot in here, it's making us perspire.
Undo the spell or the straits will be dire.

(Cast by Sabrina Spellman)
It's hot in here, the sweat's a-pooling,
So let's get down to some serious cooling!

(Cast by Sabrina Spellman)
The team doesn't need a Harvey that's tame,
So make him worthy of the hall of fame!

To Find the Rug

(Cast by Sabrina Spellman)
Everyone inside is beginning to bug,
Help them find their stupid lost rug!

To Block a Blizzard

(Cast by Sabrina Spellman)
Block that snow from pouring out,
Stick something in that spewing spout!

To Reverse all of Sabrina's Spells

(Cast by The Quiz Master)
Because she admitted she was wrong and a lout,
Every spell she incanted will be undone,
Including several ones she doesn't even know about! 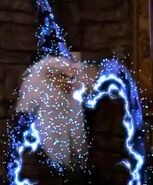 Add a photo to this gallery
Retrieved from "https://sabrinatheteenagewitch.fandom.com/wiki/Oh_What_A_Tangled_Spell_She_Weaves?oldid=14015"
Community content is available under CC-BY-SA unless otherwise noted.