Irma Spellman is the matriarch of the Spellman Family and the great aunt of Sabrina Spellman.

Known as the "dreaded holy terror of the Other Realm," Irma is quite the ball-buster and has a knack for sticking her nose into the affairs of her family members.

Sabrina first met Irma on her 20th birthday when Irma arrived to put Harvey Kinkle on trial to test his loyalty to the family after discovering that he knows that Sabrina's a witch. Irma's torture was cruel but Harvey proved that he would not tell a soul and she let him go. Before she left, however, she turned Hilda, Zelda, and Salem into pigs after Hilda called her "prune face." Sabrina bravely stood up to her which no one else had ever done, and Irma removed her spell, telling Sabrina that by standing up to her she had earned her respect. Irma returned a while later, to force an arranged marriage on Sabrina with a handsome, yet reluctant witch named Peter. After Sabrina and Peter meet, they both stated the fact that neither was interested but Peter soon fell in love with Sabrina's roommate Roxie, who returned his feelings. Hilda and Zelda warned Sabrina that if Irma found out (and Irma herself stated that if Peter married a mortal), she would banish him from the Other Realm and make the mortal face misery for the rest of her life.

Peter and Roxie hastily got engaged to get married and at the ceremony everyone is shocked to see Sabrina in the wedding gown, stating that she would rather give up her own happiness to satisfy Irma's wishes than see Roxie and Peter suffer. Hilda and Zelda convince Irma to forgo the wedding and she agrees that meddling in her family member's lives is getting boring to her.

Irma visits Sabrina the following year after discovering that her niece was engaged, expecting her to be betrothed to Harvey. She was shocked to find that Sabrina was engaged to another man named Aaron and assumed that he was a witch. When Sabrina's plan to pass Aaron off as a witch failed when Harvey shows up and accidentally spills the beans, Irma turns Aaron into a gold fish. When Sabrina renounces her magic in an effort to show Irma how much she loves Aaron, Irma offers Sabrina's powers to Harvey who takes them and uses his love for Sabrina and desire to see her happy to turn Aaron back into a person; motivation that was stronger than Irma's contempt for Aaron and thus stronger magic.

While Aunt Irma has an indomitable hatred of Mortals, she approved of Harvey and later officiated Sabrina's marriage to him, though this was off-screen. 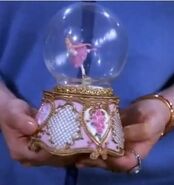 Add a photo to this gallery
Retrieved from "https://sabrinatheteenagewitch.fandom.com/wiki/Irma_Spellman?oldid=13875"
Community content is available under CC-BY-SA unless otherwise noted.