Inna Gadda Sabrina is the 8th episode of Season 2 on Sabrina the Teenage Witch.

The Quizmaster has another test for Sabrina; she has to brew up something from the book "Brewing and Concocting with Two Hot Tamales." Sabrina decides to brew a Time Ball which she uses to go to the 1960's. When Salem encounters and accidentally swallows the Time Ball on Sabrina's desk because of it's sardine scent, it takes Sabrina's entire life back to the groovy 60's, and Sabrina initially embraces the peace-loving mood of the era, but soon realizes that women have come a long way in the last thirty years. However, when Salem refuses to cough up the Time Ball, and runs away from home, Sabrina must locate her missing cat before he does any more damage to the 90's.

(Hilda and Zelda are meditating and the phone rings)

Zelda: I hear bells... Have I reached Nirvana?

Hippie Driver: Did that cat just talk? Or am I picking up his thoughts telepathically?

Salem: You're right. You can read my mind. And now you're sensing my great need to stop in Philadelphia for a cheese-steak.

Hippie Driver: I’m communicating with animals! This is so radical. 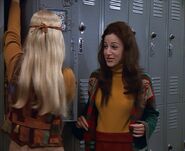 Add a photo to this gallery
Retrieved from "https://sabrinatheteenagewitch.fandom.com/wiki/Inna_Gadda_Sabrina?oldid=15136"
Community content is available under CC-BY-SA unless otherwise noted.