Hildegarde "Hilda" Antoinette Spellman is one of Sabrina's aunts, a 642-year-old European witch who is Zelda's younger sister both of whom live in the Mortal Realm. She is often portrayed as the less pragmatic of the two aunts, and constantly worries about things that could be considered superficial. Hilda was also the more outgoing and fun-loving aunt.

Hilda is a tall, curvy blonde who had a very wacky fashion sense at the beginning of the series. Often wearing bright colors with ruffles and faux-fur, sometimes sporting animal prints. Hilda's fashion sense gets a little less eccentric as the series goes on, but she still favors bright, bold colors. Hilda often wears a short skirt to accentuate her height, usually with high healed boots. Hilda's hair varies in length throughout the series (shortest in season one), however, her most recognizable look is with her hair tied up in a bun, although later in the series she wears her hair down more, often curling it.

Hilda is often considered the more fun-loving and ditsy of the two aunts; often getting into magical messes similar to her niece's, however she helps Sabrina through many tough dilemmas and spells gone awry. Despite her ditzy and accident prone nature, Hilda proved herself to be a skilled and powerful witch throughout the series. Sometimes she is usually the straight man next to Zelda antics.

Hilda and her older sister, Zelda, grew up in the 14th century,[2] having been born in the Northern sector of the Other Realm.[3] Hilda is the fourth child in her family, having an older brother and two older sisters, and a younger sister. When Hilda and Zelda were children, their sister, Vesta, turned their parents into pigs, as she was terribly jealous of all the attention Hilda and Zelda got. The Witches Council decided that people with pigs feet couldn’t raise children, so when Vesta refused to turn them back, Hilda and Zelda's parents adopted them out to a nice family in the country; their parents lived in the barn. One month later, their mother, Lydia, finally got Vesta to turn then back by head-butting her. To get Hilda and Zelda back legally, their parents had to adopt them.[4]

At some point, Hilda was making rum balls and grew tired, to help speed up the process she made a make everything round spell. Due to her impreciseness, her spell made the Earth round and this led to Christopher Columbus's arrival in the Americas.[5]

Eventually, Hilda became engaged to the witch Drell. However, he never showed up for their wedding and Hilda destroyed the Acropolis in anger; fortunately history blamed the Turks.[2]

Over two hundred years prior to the series, Hilda and Zelda moved to the Mortal Realm. However, as she was busy rebuffing the advances of Benjamin Franklin, Hilda never filled out the proper paperwork to legally live in the Mortal Realm.

At one point Hilda supported the Salem Saberhagen regime, as part of the refreshments committee, so when his attempt to conquer the world failed and he was turned into a cat, Hilda was sentenced to take care of him.

At the start of the series, Hilda is still recovering from a breakup with ex-fiance Drell, the head of The Witches Council who stood her up at the altar multiple times over the centuries. Hilda repeatedly runs into Drell throughout the season, much to her discontent, until the two finally discuss giving their love another shot; however when Hilda fails The Test of True Love, she gives up on Drell permanently. Hilda pursues her career as a professional violinist and attends numerous auditions throughout the course of the year. Often having her talent overlooked, Hilda resorts to using magic to make her rival disappear in order to take his position in first chair. Hilda was also seen giving private violin lessons at the house, though she had little patience for her struggling student. Hilda was also revealed to have imprisoned a man in the stone of her ring for not loving her.

Hilda begins an on-again, off-again relationship with Sabrina's vice principal Willard Kraft. At first, she is repulsed by him but after he gets into a fight defending her honor, she becomes attracted to him. Although she starts to become tired of him after their date, she said she would continue dating him because she "has a lot of Friday nights to fill." Cupid is also attracted to Hilda after she cheers him up following his breakup with his girlfriend. Hilda also acts as Sabrina's temporary Quiz Master after Sabrina accidentally gets Albert fired.

Hilda becomes jealous when Zelda starts dating Willard and tries to break them up on numerous occasions, convincing herself that he is still in love with her. Hilda and Sabrina's magical attempts to get rid of Mr. Kraft tend to backfire: including summoning his ex-wife Lucy and accidentally turning their lives into a silent movie. It is discovered that Hilda has been living in the mortal realm illegally and she is sent to work at a bar in the other realm, but is saved by Zelda. When practical joker cousin Zsa Zsa comes to visit, she magically has Hilda and Zelda switch places for a while, making Hilda the responsible one while Zelda plays practical jokes with Zsa Zsa.

Hilda gets sick of her violin and blows it up with dynamite. She then finds a passion for clocks and impulsively buys a clock shop which contains a Lost in Time Clock that brings people from the past to her for help and guidance. Hilda struggles to manage her business and to compete with other stores, so Zelda often finds herself having to help out.

When Hilda and Zelda's mother visits, Sabrina discovers her Aunt Hilda's adoption papers, however this turns out to be a misunderstanding, as her mother had been turned into a pig by her daughter Vesta and had to adopt her daughters back once the spell was reversed (since animals can't have custody of children).

Hilda encourages Sabrina to follow her example and go backpacking around the universe, but Sabrina enrolls at John Adams College and Hilda insists that so long as Sabrina is happy, she is happy.

Hilda's clock shop went under at some point after the events of The End of an Era and as a result of this and Sabrina moving out, Hilda feels directionless and resorts to obsessively tending to Salem's every need to fill the void. Zelda gives Hilda a healthy dose of reality (literally) and Hilda realizes that she needs to move forward with her life somehow. In an attempt to keep herself close to Sabrina and make a drastic change in her own life, Hilda buys the Bean There, Brewed That coffee house, she renames it Hilda's Coffee House and becomes Sabrina's boss.

Hilda's biological clock starts to literally tick and she has to leave it with Other Realm doctors for adjusting. When Sabrina picks it up and loses it, Hilda panics at the thought of never being able to conceive a child and tries to get married as soon as possible before her time runs out to a random stranger. Sabrina crashes the ceremony and offers Hilda her own biological clock, but Hilda turns her down realizing the insanity of her actions. Josh then rushes in with the clock, giving Hilda her chance at motherhood back.
Hilda is on the rebound after she breaks up with her boyfriend Wayne Banning, the president of Sabrina's college when she meets Will at the mall in the Other Realm. They instantly fall in love and want to get married. Sabrina and Zelda disapprove, and they plan to break up the couple. As soon as Zelda throws herself at Will to convince Hilda that he was coming on to her, Hilda breaks up with him. However, heartbroken, she then turns to stone and falls to pieces. Knowing Hilda's love was true, Sabrina takes Stone Hilda to a place where she can come back to life. Sabrina gambled her true love to save her aunt's life, turning into stone, to be saved by Zelda. The year ends with Hilda marrying Will at the Spellman home.
After Hilda marries Will, she and Zelda move back to the Other Realm. However, she returns in the final episode of the series "Soul Mates" for Sabrina's wedding, volunteering Zelda to be turned into a candle by the Witches Council in order to let Sabrina see her mortal mother without consequences. Hilda is last seen with the rest of the wedding party watching Sabrina and Harvey ride off into the horizon. Her last line is: "It's about time... (Zelda makes her magical ping in candle form)... I just said that!" 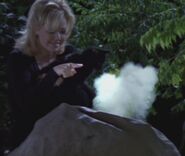 Hilda conjuring a bucket of popcorn.

Hilda has the typical weaknesses of a witch. Being a Spellman, she had an addiction to pancakes and was deathly allergic to Other Realm poppies.